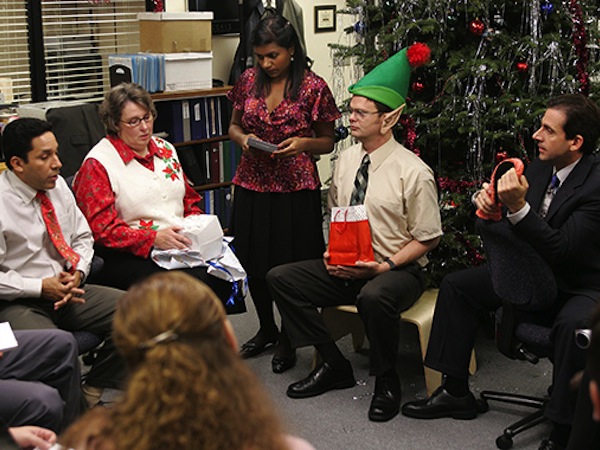 Where to Watch: Netflix

The Office is almost undeniably the king of sitcom Christmas episodes. With all of them being winners, it’s hard to pick just one. Although Season 2’s “Christmas Party” checks all of the show’s boxes (reverse psychology, Michael Scott’s trademark cringy-ness, the ruining of yet another office party, nostalgic Jim and Pam moments, and Yankee Swap), it’s certainly genius with the following lines:

“Happy Birthday, Jesus. Sorry your party’s so lame.”
“That is a perfectly good…tree and we are going to sell that to charity. That’s what Christmas is all about.”
“Reverse psychology is an awesome tool. I don’t know if you guys know about it, but basically you make someone think the opposite of what you believe and that tricks them into doing something stupid. Works like a charm.”

With two Emmy nominations and being one of the most watched episodes of “The Office” of all-time, this episode reigns among the best of Christmas sitcom episodes and the best of its series.

Where to Watch: Hulu

When Bob inherits a storage unit around Christmas time, he hopes to find riches but finds Chet — an ex-window decorator who lived a previous life as a mannequin until being tragically separated from his mannequin wife. Being the first Christmas episode of the series, it carries a lot of weight. With Linda’s genius singing, Tina’s pubescent confusion, and Bob being the only sane person in the family, this episode highlights everyone’s favorite aspects of the show. When Bob questions Chet about his sanity, Chet replies, “You don’t need to be scared of me. I’m not one of those murder mannequins or satanic mannequins. I’m just a store mannequin that came to life.” This brief exchange, being the prelude to their Christmas disaster, sets up the episode’s brash weirdness and familiarity.

Where the Watch: Netflix

Possibly the best sitcom on television right now, New Girl perfects the “friend-group living together” comedy that Friends struggled with. While the show often has issues with balancing comedy and emotional moments, “Santa” finds New Girl’s footing. Schmidt’s take on Christmas from a Jewish perspective rejuvenates this comedical classic bit: “We were on very strict instructions from Rabbi Shmulie not to say a word until the very last Christian kid found out about Santa Claus…Ruining Christmas, very bad for our brand” and “I’m so sick of hanging out with Christians. This is my last Christian Christmas.” It definitely helps this show’s case that Zooey Deschanel (Jess Day) is the queen of folk Christmas; thus, she sings an unintelligible, yet melodic Christmas tune.

Where to Watch: Netflix

Arrested Development is arguably one of the best written shows of all-time and the best sitcom to air. As a result, it’s no wonder its Christmas episode is another winner it that it brings about all the classic Arrested Development gags (Ann singing creepy songs about Jesus, Tobias getting ready for yet another futile Blue Man Group show, and trademark Lucille neediness). The episode follows Gob firing the entire staff while Michael rushes to clean up the mess and Buster ditches the army. The best part of the episode is when Michael, unaware of the song’s promiscuous lyrics, sings the tune “Afternoon Delight” with his niece.  In reality, this isn’t much of a Christmas episode, but its sheer comical writing puts it on this list.