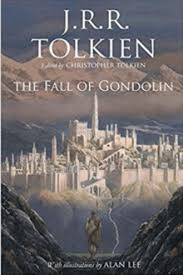 J.R.R. Tolkien’s tale The Fall of Gondolin—a story of the siege and destruction of the titular lost Elven city—is set to be published in its highly-anticipated standalone novel this August. The work has again been edited and revised by Christopher Tolkien, who has been pivotal in publishing many of his father’s works including what fans consider the other “Great Tales”: The Children of Hurin and Beren and Lúthien.

Set during the First Age of Middle Earth, the tale is an account of the downfall of the great Elven city of Gondolin as Morgoth, the First Dark Lord, schemes and eventually lays waste to one of the last bulwarks of magic and hope during the War of Beleriand. While the story is inundated with themes of evil (Morgoth’s and his armies’ presences), destruction (the eventual collapse and genocide of the Gondolin elves), and death (end of magic and places of fantasy), it also features topics of hope in the subplot of an unexpected Noldor hero—Tuor, the last hope of Arda. This champion of Men and Elves would leave a legacy that spanned throughout Tolkien’s later works—including The Silmarillion, The Hobbit (or There And Back Again), and The Lord of the Rings trilogy.

Conceived by Tolkien during his hospital recovery following the Battle of the Somme in the First World War, the adventurous and imaginative account of Gondolin was among the first Middle Earth stories ever written and served as a template for the major plot lines and motifs found in later works. It appeared in various collections of his notes until a heavily revised edition was published in The Unfinished Tales, the copy on which Tolkein based the upcoming publication.

To most casual fantasy readers, The Fall of Gondolin is but a mere shadow compared to The Hobbit and the Lord of the Rings trilogy. However, it is this book that marks the beginning of a literary and cultural phenomena that not only established Tolkien as one of the finest English writers of the 20th century but also reformed the fantasy genre. This tale, finally receiving its well-deserved standalone publication, is a testament not only to imagination, beauty, destruction, death, and horror, but ultimately to the goodness and courage that exist even in a world ravaged by never-ending war.