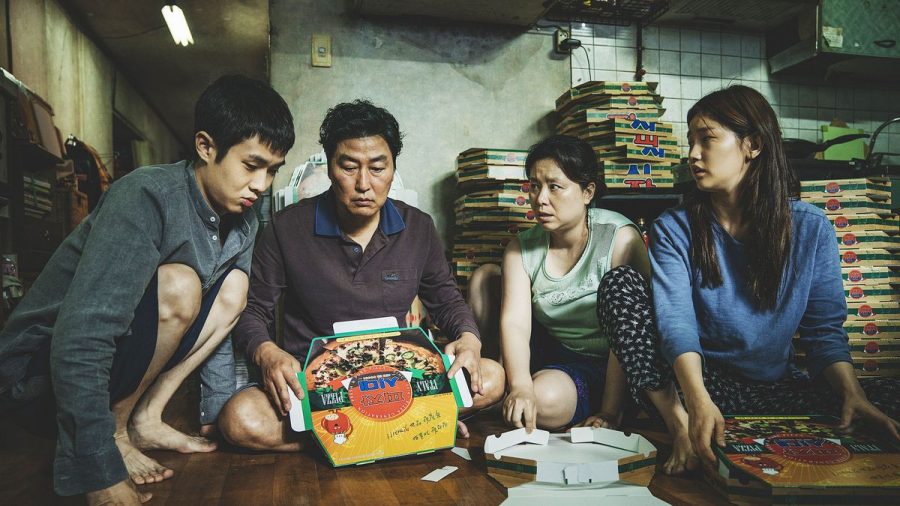 According to Statista, 2019 saw the release of around 786 films in the United States and Canada alone.1 However, none of these films won the Academy Award for Best Picture. A foreign film, the Korean movie Parasite, won the coveted title marking the first time in the Oscar’s 92-year history that a non-English language film took the top prize (NY Times).

Once Upon a Time In Hollywood: Quentin Tarantino reimagines the grisly Manson murders as actor Rick Dalton and his stunt double Cliff Booth feel left behind in a changing 1960s Hollywood.
A Marriage Story: This Netflix original follows the raw and realistic story of a divorce between actress (Scarlett Johanson) and director (Adam Driver) as they try to settle visitation for their young son after the mother relocates to Los Angeles.
Parasite: The winner of the award, Parasite, focuses on a poor Korean family that, one by one, take over jobs working for a wealthy but naive family. Things go awry, impacting their well-orchestrated but risky plan.
Jojo Rabbit: Set in Nazi Germany, this surprising comedy centers around a young boy in the Hitler Youth. Advised by his imaginary friend, an eccentric Hitler (played by the film’s director), the boy struggles with his discovery of a Jewish teenager his mother has hidden in their attic.
1917: 1917 was the Oscar winner for best cinematography; the movie is edited as one continuous shot. Two British soldiers are issued to deliver a message to call off an attack that is an enemy trap. One of the soldiers’ brother is in the division, and he and many others will die if the message is not delivered in time.
The Irishman: A old mobster played by Robert DeNiro looks back on his time as a hitman working for many famous gangsters.
Joker: A failed stand-up comedian slowly loses his grip on reality as he deals with the corrupt society of Gotham City, transforming into the villain Joker.
Ford v Ferrari: A race car driver and the designer Carrol Shelby face tough odds as they build a Ford to race against the legendary cars of Enzo Ferrari in 1966 France.
Little Women: In the late 1860s, author Jo March reflects on her childhood with her three sisters in Massachusetts.

But who decides who wins the title? A group of around 7,000 voters vote for best picture and their own professional categories respectively. These voters represent their own category, e.g., Sound Design. I spoke with two working actors and voting members of the Screen Actor’s Guild to get their views on these films. Their take on the nominated films was more critical and nuanced than that of the average moviegoer. As voting members, they receive copies of all the films for their review.

They both chose Parasite for the number one spot: “For best picture, my choice is Parasite; not only is the script wonderful, but the acting ensemble and the way it is shot is gorgeous.” Personally, I and many of my friends enjoyed Netflix’s A Marriage Story. However, this was not the opinion of the voting actors:

I thought it was indulgent. I was never moved. It was the ‘idea’ of a marriage breaking apart, but it didn’t seem real. I never felt for the couple. Just because you bang walls and yell and scream doesn’t mean it’s believable and I always find that in real life reactions run by the gamut and are often surprising. I didn’t buy it.

Both voters related to how things would work in reality rather than just taking it for granted; they could not believe in or connect to the characters: “It all felt very generic. Lots of histrionics and emotion to get a particular response. But it failed for me because it didn’t ring true.” The criticism was similar for Joker:

I found them [A Marriage Story and Joker] both contrived. I didn’t buy it. I never really got emotionally invested in the lead characters. That generally tells me that the director didn’t spend the time to lay out a specific world that I could believe in. I didn’t feel like Joaquin Pheonix gave a performance. His story wasn’t grounded in anything I really found believable. I love him as an actor and he’s incredibly gifted but I thought what he did was what we call actor tricks. But that’s not entirely his fault. The director never spent much time caring about what was wrong with him. We knew he had mental illness and he ended up responding violently to what was happening, but I never cared. I was never invested because the director wanted to make some kind of statement (I have no idea what it was, it was awfully confusing) rather than build a framework for the character that was believable.

The Irishman was well-received:

I thought the Irishman was beautifully shot written and directed and acted but for me it ultimately didn’t have a strong enough message so I think the parts equals much more than the sum of those parts. The art design, costumes, set an overall feel of the movie I thought was really beautiful. Every scene beautifully shot and it always had some element that was surprising. What is the story of a man who lived with a lot of regret and never took the opportunity to own up to his failings. I became frustrated in the lead character and as a result frustrated by the film at the end.

Once Upon a Time in Hollywood got raves across the board:

I loved Quentin Tarantino’s movie. I thought it had such an original style. And he captured a pretty wonderful and difficult tone. The movie was funny and touching and scary and disturbing and yet hopeful and warm. He gives his actors room to shine. And they all did. He gets you to fall in love with them. He gives you the time to really linger over who they are and get excited about them.

I thought Leonardo DiCaprio‘s performance was brilliant and that he was denied an Oscar he should’ve had.

Finally, here is a little insight on a movie I had heard nothing about, Little Women:

My favorite movie was Little Women. Spectacular writing, directing and acting for sure. Like the book, the movie tells us that it’s crazy that women must rely on men for their future. The main character is driven by her ambition to be a writer and someone who doesn’t have to rely on a man to take care of her. But the movie also celebrates the comforts of family and home and tradition. The little things in life. The every day things. I found every character fascinating. Because I think the director really loved telling you about each of them who they were what they wanted and what their struggles were. She had respect and dignity.

As evidenced by these reviews, the process of choosing a film for best picture is a strenuous one, with many things taken into consideration. Only 7,000 people decide, which is a small portion of the viewing population. Should best picture be decided by people in the industry or the general population? I argue that films are made for the general public, rather than those in the industry. Either way, the Oscars are a vehicle to showcase the very best in film, and the select handful of nominees opened the eyes of viewers to films they would not normally watch.

Special thanks to the voting actors who shared their insights for this article!