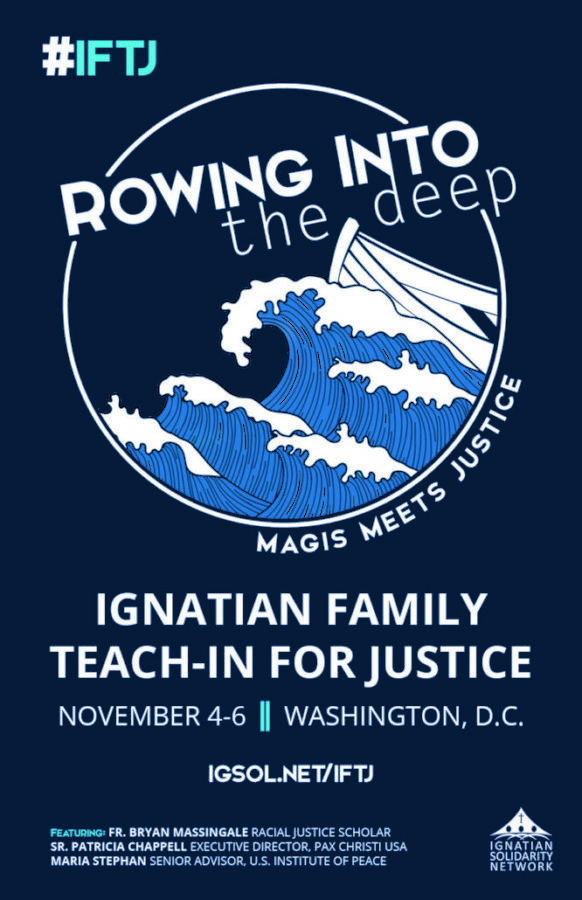 Over the weekend of November 4-6, Saint Peter’s Preparatory School sent a delegation of twelve seniors and two juniors to attend the annual Ignatian Family Teach-In. The conference occurred in Arlington, Virginia, where the students spent three days listening to educational breakout sessions and learning from keynote speakers about prevalent social injustices. Run by the Ignatian Solidarity Network, the theme for this year’s Teach In was “Rowing Into the Deep,” where the students were taught to leap rather than step out of their comfort zones to confront underlying issues that otherwise would be overlooked. The final day of the program was called the advocacy day, in which students met with representatives of the state (Senator Booker, Menendez, etc.) and  introduced their propositions. For example, the group I was in proposed environmental reforms.

This religiously affiliated organization, the Ignatian Solidarity Network, has its fundamental values in Ignatian spirituality. This organization seeks solidarity with marginalized communities and faith shown through justice and collaboration. With Catholic roots, the Jesuit advocacy this organization promotes spreads religious affiliation and care for social good. Because this organization is Jesuit, it utilizes the Magis as a guideline, synonymous with the educational and religious expectations at Saint Peter’s Preparatory School.

Personally, I have mixed feelings after attending the event. In one sense, the event was educational, as I was challenged to consider topical matters I previously chose to avoid and I became keenly aware of social injustice. Racism was defined as the purposeful discrimination from person A onto person B based off of background (ethnic, cultural, race, etc.), but I learned of the inherent racial bias coursing through the veins of society.  Since 2003, 100 billion dollars have been invested into homeland security and border patrol, which has developed abusive legal actions towards immigrants. On another hand, the legal system behind the death penalty has harsh sentencing based off of minor crimes. I found both these facts enlightening and began to look at society through a new lens, a lens where injustice is a fundamental. However, amidst a conglomeration of Jesuit schools across the nation, I desired more engagement among the schools–I felt the event lacked a sense of unity among its ethnically, geographically, and socially diverse population. On another hand, I felt the views were one-sided and biased. Although I found it unneeded in a religiously affiliated event, I appreciated how my views were challenged and I felt the need to reconsider my worldly understanding.

Mr. Dougherty, one of the three chaperones, considered the weekend a great success. Each year since Prep has been going, he sees the delegation getting more out of the event and the overall success and size increasing. Commenting on the Prep delegation, he stated, “No negatives in our group–our guys were great. As smooth as can be.”  Not only did he show content with the event, Mr. Dougherty showed his pride in Prep’s students’ abilities to respectfully attend Prep events.

As expected of a Prep trip, the event as a whole was a success. With no general downsides from the overall weekend, the men have undoubtedly achieved new levels of education.