A Year Without a Christmas Video? How a weakened TV Studio worked around Covid 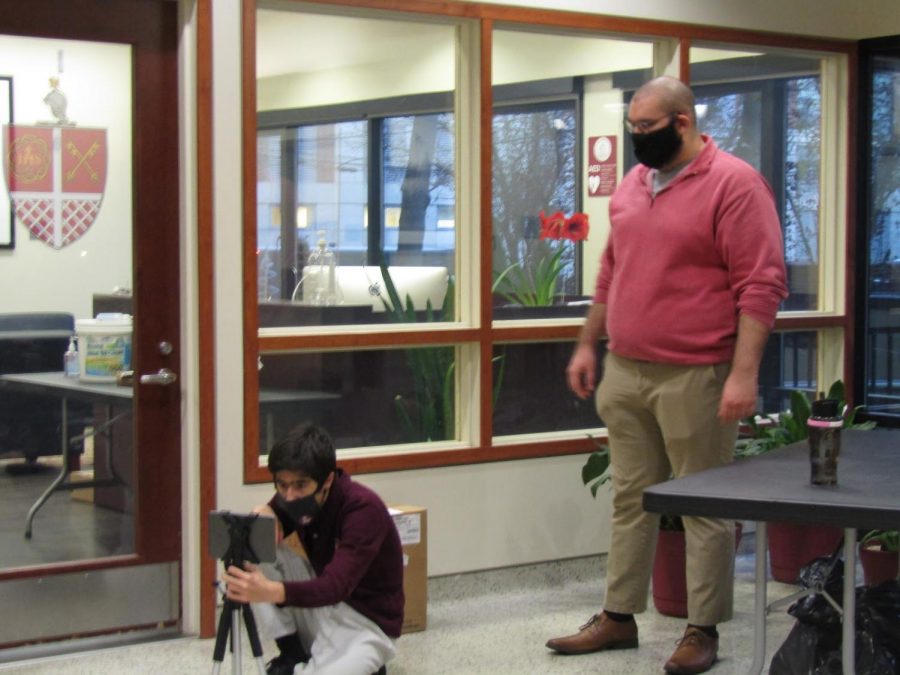 Every year since 2012, the TV Studio has reliably churned out a short film to celebrate not only Christmas, but also the spirit of Prep itself. The last video, A Prepmas Carol, was well received by the student body, although sitting around a thousand views on YouTube after a year. It may seem impressive for such an amateur production, but its viewership is dwarfed by previous videos. The most successful, 2016’s The Prep Express, has over five thousand views after four years. Over time, every student at Prep has become fond of this new tradition.

Around the winter season, the decorations come out and the courtyard empties with the cold weather’s arrival. This time, however, Prep’s Christmas (dubbed ‘Prepmas’) was in jeopardy. Covid-19 threatened everything at Prep this year and the Christmas Video has been no exception. With Covid causing cancellation after cancellation, an article of minor importance such as the Christmas Video would surely be written off as an unnecessary risk. Right? “No,” said Mr. Maglione. Mr. Maglione, a Prep graduate of the class of 2015, continued the Christmas Video this year. The video, starring Dylan Perez, ‘21, drew on the themes of Prepmas spirit, and its importance in the school’s culture. “For the past nine years, the Christmas Videos have been a hallmark of the Prep experience. A Prep Christmas Video serves as a mini time capsule for the year it comes out. Not only are they fun to watch in the moment, but they can instantly teleport you back to Prep when you watch one years later,” said Mr. Maglione. Mr. Maglione worked on the original 2012 video, in the aftermath of Hurricane Sandy. “The storm took a huge toll on student and employee morale, but the Christmas Video was proof that we’d be able to overcome any struggle with humor and teamwork.”

The creation process was not without its challenges. The difficulties began before the cameras even started rolling. The work started over Zoom, where over a dozen students debated over the properties of the coming video. As time went on, some people became more and more involved, and the central team narrowed down to around seven people. As this group formed, questions and doubts began to appear. Where was that green screen from two years ago? How are we going to film? What’s going to happen? These questions were intensely mulled over in hours of Zoom calls and some topics were easier than others. The camera situation was resolved quickly; however, debating over crucial plot points was much more difficult. Google documents were created and ideas were raised and eliminated rapidly. “We had a running doc that we all had access to,” says Louis Correro, ‘23. “We would just give ideas, on the Zoom and on the Doc. Every once in a while, one of the ideas would get a positive reaction from the other members of the TV Studio, and we unanimously agreed that we wanted this to be in the video.” After several meetings, a general story was finally worked out. The second step was to take this story off the Google doc and into a 10 minute video. More Zoom meetings were arranged for the preparation of shooting the video.

On the Monday of December 7th, five people assembled in Mulry Hall room 210 to begin shooting the 2020 video. With the limited resources and cast size, very little dialogue was recorded that day — most scenes were focused around Dylan’s character. This continued for two more days, with the team traveling around the school armed with green screens and an iPad mini. Louis Correro and two other sophomores, Stevie Vago and myself, Benjamin Ackman, served as extras and stage managers. We were joined by another sophomore, Charles Burt, on the 11th. Shooting the video took over a week and many edits to the original plans were made on the fly. The reduced cast size threw things off balance a bit according to Stevie Vago: “In some ways it made it easier, because it was just less people to manage and things were able to move quicker. But at the same time, because  the group was so small, we didn’t really have designated roles. For one scene, it would be me being the cameraman, then the next scene it would be Louis.” This reduced size was reflected in the video as well: “It was kinda funny, because we had so few people, the same extras show up multiple times in the video. It works within the plot, but it is just interesting playing a bunch of different background roles.”

Eventually, the filming came to an end, and the TV Studio retired to reconvene and edit. Editing and filming were similar in terms of the process: the group stood in front of a screen with multiple voices giving feedback and chiming in. Editing went smoothly compared to shooting; all editing was conducted within one room. The debates still continued, however. Disputes over sound mixing and scene length still continued, but very little was cut. The current video includes the vast majority of what was shot the previous week.

The 2020 Christmas Video was uncertain from the beginning. The TV Studio battled Covid as well as a lack of resources and manpower to produce it. It remains to be seen if this iteration will grow to challenge the “legendary” Prep Express, but this year’s video has as much effort and spirit in it as the seven that came before. It is designed to include the signature blend of humor, story, and heart that the videos have come to be known for. In the words of Mr. Maglione: “COVID-19 has certainly made the filming of the Christmas Video difficult, but just like in 2012, the students are proving they can overcome any obstacle they face to get the job done.”