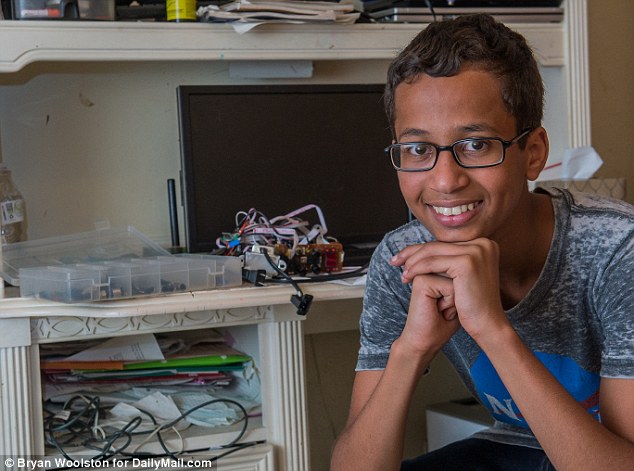 One of the more puzzling news stories that has emerged over the past few months is the interrogation and subsequent arrest of a Muslim teen in Texas over a clock device which he brought into school. Delving into the chain of events from that fateful September day up until the present, one is left wondering about the true intentions of the teen and his family.

On September 14, 2015, Ahmed Mohamed, a freshman at MacArthur High School in Irving, Texas, brought a clock into school. After showing it to his engineering teacher, Ahmed was advised to keep his contraption in his locker for the rest of the day. However, he took it out during English class, and after an alarm on it went off, the teacher became suspicious and sent him to the principal. From there, he was interrogated by the principal and police officers about the intent of the device before eventually being arrested and taken to a juvenile detention center.

The events of the day, while undoubtedly etched into the minds of most readers, must be clear in order to understand the full scope of the story. Ahmed’s actions would not only result in a suspension from school, but a country-wide conversation about Islamophobia and racial profiling within the U.S.

As the story broke on that sunny September afternoon, it seemed to be a pretty cut and dry case of Islamophobia, that is, the dislike and prejudice of Muslims. Many decried the seemingly haphazard treatment of the issue by the school district and local police department, with some news sources reporting that Irving’s police chief and others were receiving death threats as a result. Media commentators, politicians, and other public figures flocked to Ahmed’s defense, praising his courage and his intellectual curiosity. The hashtag “#IStandWithAhmed” quickly trended on Twitter, and soon the incident became prime time news. Many prominent figures, such as Facebook CEO Mark Zuckerberg, Hillary Clinton, and even President Barack Obama pledged their support to the Muslim teen. Ahmed and his family were invited to the White House, as well as the United Nations. In addition, Google and other tech companies offered him tours and employment opportunities. Tweets, news pieces, and TV segments highlighted how the predicament typified the already hot issue of Islamophobia and racism within the US.  The outpouring of public support for the beleaguered boy had turned this ugly affair into a feel-good story. And yet, the ensuing months would see a subtle shift in the public’s perception of the budding engineer for the worse.

After the initial media frenzy, the story eventually faded away from the public spotlight, seemingly with a happy ending. However, the next chapter of the story is a little murkier, and it began with the news that Ahmed was accepting a scholarship to an academy in Qatar and that he and his family would be relocating. It was a somewhat puzzling, but an important decision nonetheless, given the amount of the media attention and publicity surrounding the high schooler.

The immense social and conventional media presence surrounding the story generated intense speculation of both Ahmed’s family, the legal procedures of the day, and the now famous clock. Many technology enthusiasts began to scrutinize the clock device, claiming that it was a merely a stripped down clock, not a homemade one. In an interesting article from a tech blog, one user painstakingly breaks down the device and comes to the conclusion that it is indeed not a unique creation. Another primary focus of the story was the fact that Ahmed was actually arrested, not just merely questioned. It turns out that he was actually arrested under the guise of a Texas “hoax bomb” law rather than being arrested for building an actual bomb. While this facet of the story does not diminish the severity of his detainment, it does seem to make more sense, given the rather ambiguous nature of the device. It is small details such as these which were largely overlooked during the immediate frenzy around the boy and have since helped turn public opinion against him.

The most recent, and troubling development in this long running story is the news that Ahmed and family are suing the school district and city of Irving for 15 million dollars. It is this component which has drawn widespread ire from media and public alike, with many pegging the $15m Ahmed’s family is seeking as egregious. Some have even gone as far to say that Ahmed and his family set up the entire incident and are essentially pulling a money-grab. While this is unlikely, the circumstances following the affair leave some scratching their heads at the family’s thought process. For many, the inquisitive boy’s reputation has been sullied by this strange series of events. Indeed, the public will likely never know of the true intentions of Ahmed and his family; one can only speculate at the whirlwind of responses it has generated.