Presidential Acquittal and the State of the Union Address 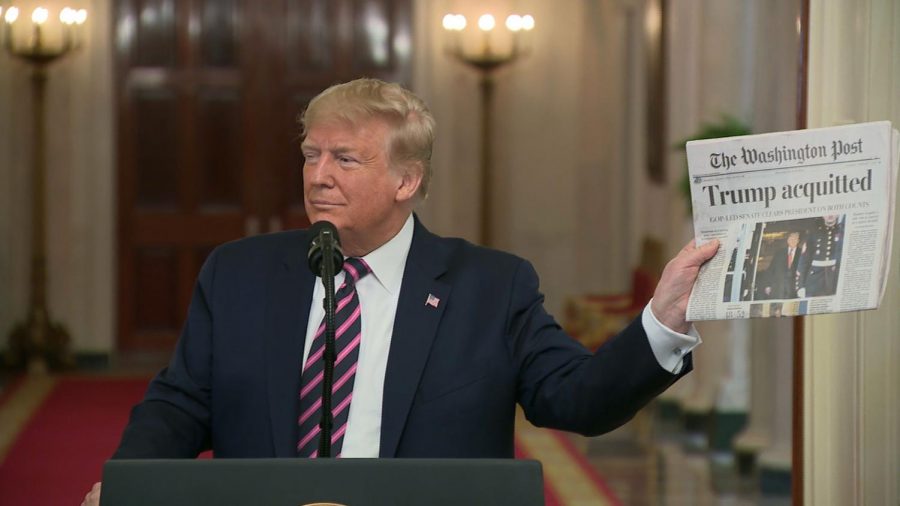 In only the third case of presidential impeachment in U.S. history, Donald Trump was convicted by the House of Representatives on the charges of abuse of power and obstruction of Congress.

Everything centered around a phone call which Trump had with Ukrainian president Volodymyr Zelensky. He allegedly threatened to withhold mandatory military aid from Ukraine, only to release the hold under the condition that Ukraine launch an investigation into Hunter Biden, the son of candidate Joe Biden. This call took place in July 2019; a month later, a whistleblower from the intelligence community filed a complaint to the inspector general about the call.

On September 24th, the House opened an impeachment inquiry into Trump which marked the start of the impeachment process. Soon, many witnesses testified, including Bill Taylor, a top US diplomat in Ukraine, Marie Yovanovitch, the now-former U.S. diplomat to Ukraine, and Gordon Sondland, the U.S. ambassador to the European Union. Because of Trump’s perceived denial to comply with the impeachment process, the House mirrored that in its conviction of the President. On December 18, 2019, the House voted on and adopted two articles of impeachment.

After adopting the articles, a month passed before Speaker of the House Nancy Pelosi (D-Cal) sent them to the Senate. Days of discourse ensued as both sides presented their cases. The prosecution was led by the House impeachment managers, especially Reps. Adam Schiff (D-Cal) and Jerry Nandler (D-NY). The defense was led by Trump’s personal defense team of lawyers. Some media painted Schiff as a hero as he gave the majority of the prosecution’s case; yet on only the second day of the presentation only one million people watched his speech across all major news networks. Debate went back and forth between the two sides for days.

That was until the New York Times attained a manuscript of an upcoming book by Trump’s former security advisor, John Bolton. In his book, Bolton allegedly says that President Trump told him about the pressure campaign on Ukraine dating back to May. Immediately, the prosecution urged to have Bolton testify. After all, he seemed to have valuable information that could have changed the tide of the trial.

The next step in the trial was to vote on whether to have witnesses testify or not. A simple majority was all that was needed to have the procedure go into effect. This was the crux of the trial: if the vote was yes, potentially incriminating information about the President’s dealing with Ukraine could be obtained and shift party sympathy of the majority-Republican Senate; if the vote was no, acquittal would be all but guaranteed, as Senate Republicans did not seem bemused by the evidence provided by the prosecution. On January 31, the Senate voted on the procedure. In a close 51-49 vote, the Senate rejected having witnesses in Trump’s impeachment trial and, thus, the trial was all but over.

The day before the deciding vote, President Trump gave the annual State of the Union Address. The bitter partisan division seemed to be at an all-time high, as President Trump ignored Speaker Pelosi’s outstretched hand before the start of his speech. He delivered his address with fiery remarks, using phrases such as “all-time high,” “better than ever before,” and “highest in this country’s history.” He introduced many guests: the elected President of Venezuela, Juan Guaidó, a military family whose father returned during the speech, a renowned border police chief, a girl born at 21 weeks of pregnancy and her mother, the parents of a girl kidnapped by ISIS, and many more. He also awarded the Medal of Freedom on the spot to Rush Limbaugh, a famous controversial, conservative radio host who had recently been diagnosed with stage 4 lung cancer.

On February 5, 2020, the Senate voted on both charges: 52-48 on abuse of power, and 53-47 on obstruction of Congress. Almost all Republicans voted to acquit on both charges, and all Democrats voted to convict. Mitt Romney (R-UT) became the first Senator in U.S. history to vote to convict a member of his own political party as he voted to convict on the charge of abuse of power. Nonetheless, both charges failed to reach the ⅔ vote required for conviction and, as a result, President Trump was acquitted.

If anything, this entire process shows the error in American politics. This country has become so partisan that it seems like cooperation is impossible. Politicians don’t seem to work together, but instead work for the America they want. Some are fearful of the prospect that impeachment may become a mere political tool for the minority party to exploit when it simply does not agree with. Is this what our democracy has become?