The Impeachment Strikes Back 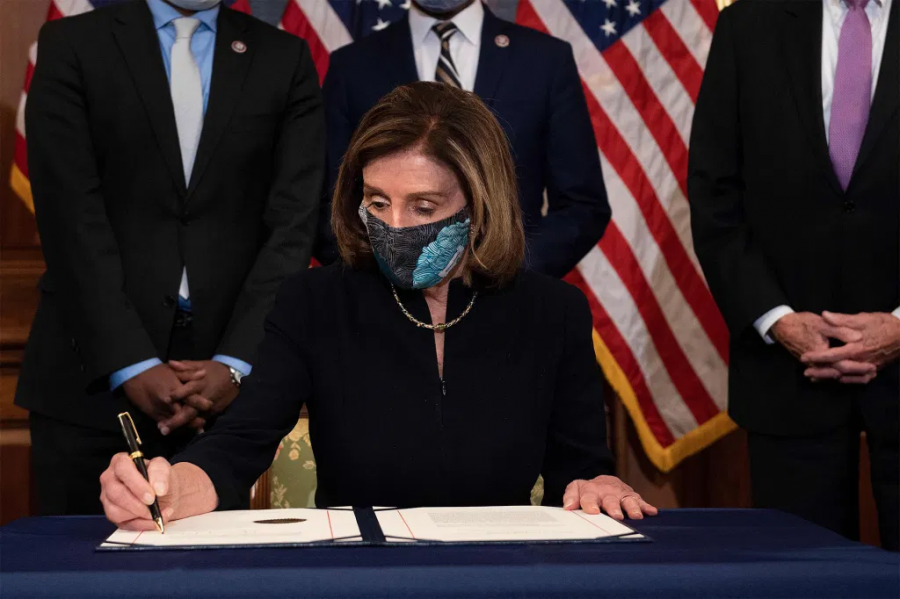 President Donald J. Trump has been impeached by the House of Representatives (again), thereby making him the first President in American history to have been impeached twice.

On January 13, 2021, the 117th Congress, acting under the leadership of House Speaker Nancy Pelosi (D-CA), historically voted to impeach President Donald Trump on the charge of having incited the insurrection, which the nation watched in shock and horror as the Capitol was under siege. (Read the full Article of Impeachment here.) President Trump is the first sitting president to have been impeached twice by the House. All House Democrats voted in favor of impeachment, including ten Republicans, the most notable of whom is Liz Cheney (R-WY). The high-ranking daughter of former Vice President Dick Cheney made a statement, in which she forcefully condemned the president: “The President of the United States summoned this mob, assembled this mob, and lit the flame of this attack….None of this would have happened without the President.” The final vote count was 232-197.

You may remember that Trump was impeached around this time last year for a “perfect phone call,” as he claimed. However, stark contrasts are present between the two proceedings. Visibly, you could see that all Representatives were wearing masks in light of the COVID-19 pandemic. But in procedure, there were also many differences. Unlike last year’s proceedings, there was never a chance for a legal team to defend President Trump and the Democrats did not present an argument for the second impeachment of a president. Within one day, with a solid Democratic majority and some Republican support, Speaker Pelosi was able to impeach the president without a trial, an investigation from the House Judiciary Committee, and other parts of due process. For comparison, it took almost three weeks for the first impeachment of President Trump to come to fruition. Representative Jim Jordan (R-OH) questioned the motives of his colleagues who were seeking impeachment: “We should be focused on bringing the nation together. Instead, Democrats are going to impeach the president for a second time one week – one week before he leaves office. Why?…Why?” (Watch Rep. Jordan’s full speech here.)

Some Republicans are worried that this impeachment will set a bad precedent, which can be used against future presidents and government officials in a “snap.” In fact, those fears are already coming to fruition. In an apparent act of retaliation against the Democrats, freshman Representative Marjorie Taylor Greene (R-GA) announced that she would introduce Articles of Impeachment against President Joseph R. Biden, Jr., on January 21, 2021, on Greg Kelly Reports and Twitter. (Listen to her announcement here.) However, due to the lack of a meaningful investigation in the court of law and the House Judiciary Committee, the question still remains: Did President Trump in fact incite the assault on the Capitol, as Democrats and some Republicans have alleged? This portion of the speech at the “Save America Rally” has been cited as the impetus for the impeachment process: “We’re going to walk down. We’re going to walk down any one you want, but I think right here. We’re going to walk down to the Capitol, and we’re going to cheer on our brave senators, and congressmen and women. We’re probably not going to be cheering so much for some of them because you’ll never take back our country with weakness. You have to show strength, and you have to be strong. We have come to demand that Congress do the right thing and only count the electors who have been lawfully slated, lawfully slated. I know that everyone here will soon be marching over to the Capitol building to peacefully and patriotically make your voices heard. Today we will see whether Republicans stand strong for integrity of our elections, but whether or not they stand strong for our country, our country.”

President Trump did meaningfully respond to last week’s riots in this video address. It came after having been permanently banned on Twitter, Facebook, Snapchat, and having been impeached (yet) again. Since the siege of the Capitol, Trump has repeatedly called for peace in other ways; however, most believe that his condemnations follow the adage of ‘too little, too late.’

Since the House has done its part, the Senate shall carry out a vote to remove the president if it so desires. Unlike the impeachment vote, which requires a simple majority, the vote to convict and remove the president from office requires a two-thirds supermajority, or 67 Senators. However, Senate Majority Leader Mitch McConnell (R-KY) released a statement, in which he decided that a vote to convict the president would not come about until January 20th, on which date President Trump will have left office and President-elect Joseph R. Biden, Jr., will have become the 46th President of the United States. Therefore, there is no reasonable path by which there will be a President Mike Pence who would fill the gap between the removal of Trump and the peaceful transition to Biden.