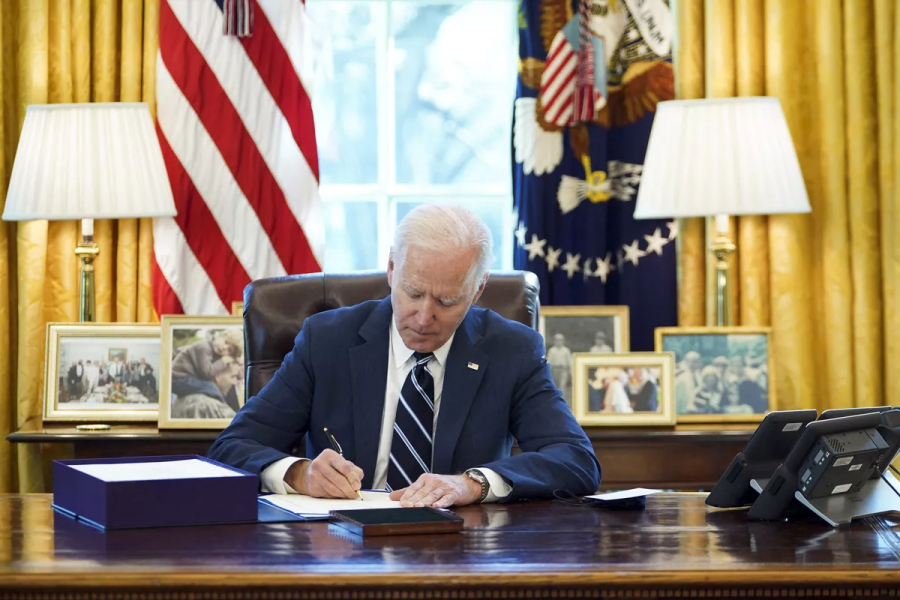 Last year during the campaign and during President Biden’s transition, Democrats promised big relief amid the pandemic. After they regained control of both the House of Representatives and the White House, they have now delivered on that promise. The American Rescue Plan Act of 2021 sends out a third round of stimulus checks to American families, this time valued at $1,400 if one’s income is $75,000 a year or lower. The plan also includes funding for vaccine distribution and funding for schools, many of which still have not opened after remote learning was introduced one year ago. Furthermore, more support for restaurants and small businesses, the hardest hit during the pandemic by lockdowns, will be given out. Just before he signed the bill, Biden said: “This historic legislation is about rebuilding the backbone of this country and giving people in this nation, working people, middle class folks, people who built the country a fighting chance”.

However, they did not receive any support from the Republican party in Congress. The House voted 219-212, with two Democrats voting with House Republicans, to pass the American Rescue Plan (ARP) and the Senate voted 50-49, with one senator absent. Republicans were unified in their opposition “We have the good people of Iowa being asked to support blue state bailouts,” Sen. Joni Ernst (R-IA) said. “And you know who receives the most in these blue state bailouts? … Chuck Schumer’s state of New York and Nancy Pelosi’s state of California.” Florida Governor Ron DeSantis (R), whose response to the coronavirus pandemic has been controversial due to a lack of mask mandates and capacity restrictions, says that the ARP will punish states, which did not impose harsh lockdown restrictions. When speaking in Tallahassee after having given a CPAC speech celebrated by many Republicans, he said: “That is completely unfair. How someone in Florida would vote to penalize the state of Florida and send that money to New York and New Jersey and Illinois and California, I have no idea why you’d want to do that. But as it stands right now, we would get $1.2 billion less than if they just did a straight share of the population.” According to the U.S. Bureau of Labor Statistics, Florida’s unemployment rate in January 2021 was 4.8%, whereas New York’s was 8.8% and California’s was 9%. Furthermore, investors on Wall Street are beginning to worry about the 10-year treasury yield rates, which reached as high as 1.7% on March 18th and 19th, causing the NASDAQ Composite of technology stocks to sink from approx. 13,500 points to approx. 13,000 points within two trading days. When the yields increase, they raise concerns about inflation in the coming years. Most notably, Former Treasury Secretary Lawrence Summers on Bloomberg News called the relief plans enacted over the past year in response to the coronavirus pandemic “the least responsible fiscal macroeconomic policy” in four decades, which would refer to the incredible inflation that started in the early 1970s and eventually spilled over into stagflation under President Jimmy Carter’s administration.

Americans across the nation are beginning to receive the third round of stimulus checks, or “stimmies,” as they have been dubbed by the millennial generation. According to Pew Research, 70% of Americans support President Biden’s American Rescue Plan, seeing it as a good-faith policy seeking to provide $1,400 of relief to Americans who have been struggling for more than a year amid the coronavirus pandemic. Some may also put some of this money towards long-term stock market investments or they may foolishly spend the checks on designer clothing or other unnecessary indulgences. At the same time, the U.S. National Debt continues climbing, now surpassing $28 trillion, and people begin to fear that all this spending may put us in a bad fiscal place for the coming years. With the new administration having been in office for more than two months, many Americans remain hopeful that President Biden and the Democratic Congress will lead the country out of the pandemic and into the future in a responsible, Constitutional, and unified way.