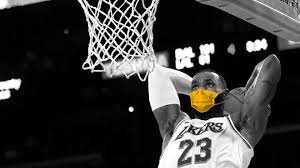 As a teenager in 21st century America, I really have one sole responsibility: stay in school. With an education, I’ll have the world at my fingertips: job opportunities, an awareness of what is around me, and an appreciation for the world and what it was, is, and will be. Further, education fosters leadership, resilience, and community. Another such institution with as many advantages and character-development is hard to imagine. With these advantages in mind, education ought to be and has been a central and unequivocally important institution in the modern world compared to others.

Teenagers in 2020, though, have been met with a challenge. We aren’t able to see our friends and teachers at school, instead having to settle for an online version. Yet, while we collectively struggle through it, our favorite athletes are able to go about their duty unaffected on the field, minus the precautions which are taken off of it. This situation clearly indicates where we are as a society today: in times when we teenagers have limited power and voice, we are told to keep to our own houses and make do with what we have; pro sports continue despite the recent spike in the U.S. for some reason which is somehow more important than good education?

This begs the question: When do sports become more meaningful than school? As it is said, one only has to follow the money: leagues like the NFL and NBA generate billions every year, while schools muster up nothing close to that. Thus it would seem that the root of all evil is the main culprit for this grave violation of our values. Corporations steer policy toward their interests with their profits as the tool, while schools with nothing close are unable to commit. This results in a major governmental partiality toward professional sports over the education sector.

But money is surely not the only impetus. The current situation does speak at least partially to our current societal values: we value players scoring touchdowns more than young students garnering life skills. Now this is a broad conjecture of course, but the aforementioned reality can certainly give credence to it. Would you not rather have a kid know how to build rockets to shoot into space than to shoot a basketball? For him to find ways to get players back on the court faster? After all, as I write this, I statistically have a .03% chance of going to the NBA and .09% of going to the NFL. Those odds make it so unlikely for me to reach the pinnacle that it would be better to finish college before going pro, and this shouldn’t even be pondered. For example, if I tear my ACL in the NFL after four years at a major college, at least I have a college degree which I can use to get a job. This hypothetical demonstrates the importance of education in guaranteeing a future for myself regardless of how my athletic career pans out, so I wouldn’t have to worry about not being able to provide for myself or those close to me. Thus education is the reliable backup plan for all prospective pro athletes and should undoubtedly be ventured down.

But referring back to those stats, it’s clear that the vast majority of people will never  clock a minute of pro sports in their lifetimes. That means that other doors need to be opened, and education is the masterkey. So why is it that I am getting a truncated version of what I need to succeed in the world in the name of slowing the spread, while pro sports are played with people literally breathing on each other, which is supposed to be taboo at this point?

Now I don’t think it would be fair to just degrade sports. In hard these times, I love being able to watch the Giants contend for the division and Rutgers prove that they’re top program in basketball. Sports have certainly helped people such as myself cope with the isolation each of us feels. I also understand that pro sports simply generate more revenue than institutions such as universities or high schools, and therefore they can give more money to those who make it run, the players. All of these are completely fair. I just want there to be logic followed in that if pro sports are deemed so important that they can continue in the middle of a pandemic, then I should be able to go to school.